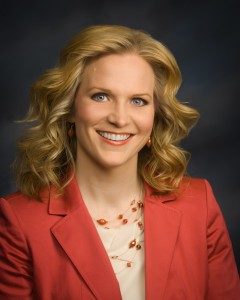 Dr. Smith provides the most SomnoMed sleep appliances of any dentist in the United States or Canada. She has over 95 percent success treating patients with oral appliance therapy. She is the only dentist in the St. Louis area to achieve the highest recognition, “Sapphire Partner” status, from SomnoMed for her dedication to successfully helping patients use oral appliances.She has been interviewed locally on Channel 4’s “Great Day St. Louis” and Channel 5’s “Show Me St. Louis”. Dr. Smith has also been interviewed by Randy Alverez in California for a national talk show, “The Wellness Hour”.

Dr. Smith has been personally impacted by sleep apnea. Here is her story:

“Shortly after I got married I became annoyed by my husband’s loud snoring.  I would lay awake for hours every night wondering how he could sleep through the noise.  After a few weeks I realized that he wasn’t just snoring.  There was more to the story than just the intense noise.  I would listen every night as his snoring would stop for several seconds, sometimes minutes at a time.

“After these moments of silence he would suddenly take a deep breath, snore really loudly and usually roll over or turn his head.

“I finally realized during these moments of silence my husband wasn’t breathing.  Sometimes, I could even hear him struggling to try and take a breath.  Every morning he complained of being tired and feeling like he didn’t sleep very well.  We tried going to bed earlier to get more sleep, but it didn’t seem to help.  By mid morning, he wanted to take a nap and every evening he would fall asleep when we were watching television.  Several times, he even fell asleep while he was driving!

“After months of struggling with exhaustion, he had a sleep study and he was diagnosed with severe sleep apnea.  The test showed he stopped breathing 80 times an hour, sometimes for 2 minutes at a time.  He was literally suffocating in his sleep!  Once he knew the problem, he was scared to go to sleep. He knew he could die in his sleep from lack of oxygen to his brain.  This lead to insomnia and made him more tired.  The doctor recommended that he use a CPAP to treat his sleep apnea.  He tried to use the machine, but couldn’t stand to have the mask on his face because he is claustrophobic.  He also didn’t want the hassle of dealing with the hoses and the water, not to mention the nightmare of trying to travel with a breathing machine.  He would complain that the whole ordeal just made him feel old.

“I began to investigate if there was anything I could do to help.  I was elated to discover that dentists can treat sleep disorders!  I enrolled in special training and spent most of my free time for five months reading articles and text books and flying all over the country attending seminars to learn how to help patients with sleep disorders and snoring.  I learned that sleep apnea kills people in their sleep.  It also creates other problems during the day, such as high blood pressure and day time drowsiness.

“After completing my training I made my husband an oral sleep appliance.  It looks like a retainer and he only wears it while he sleeps.  He says it’s comfortable and easy to wear.  After using the oral sleep appliance for two nights he reported that he felt more rested when he woke up in the morning.  After a week he was no longer snoring, and I was sleeping better too.  After a month he no longer stopped breathing in his sleep and he felt alive again!

“I’m so glad that I spent the time to become trained to treat sleep disorders.  I love hearing from my patients who use an oral sleep appliance that they no longer fall asleep at work, they have the energy to play with their kids, they can stay awake when watching a movie with their spouse, they no longer have to get up to go to the bathroom in the middle of the night, they don’t have to take their blood pressure medication anymore, they can sleep in the same bed with their spouse again, they don’t have to use the CPAP and they just enjoy life again!”

“If you snore or suffer with a sleep disorder, or know someone who does please don’t wait to call me.  I’ve witnessed the devastation that these disorders can create.  I understand your apprehension and the frustration of your situation.  Call me now and make an appointment for a consultation.  This appointment could save you or your loved one’s life.”

In September of 2016, Dr. Smith and Travis welcomed a baby girl named Liberty.  She has brought them more joy than anything or anyone, ever.  She is a blonde-headed, blue-eyed sweetheart who is on pace to be six feet tall, just like her Mom.